The inconsistent British summer looked favourably upon the annual ‘meat feast’ organised by the Friends of Tithebarn, which was held in the grounds of the highly acclaimed Royal Masonic Benevolent Institution owned Tithebarn Care Home, in Crosby, Liverpool. 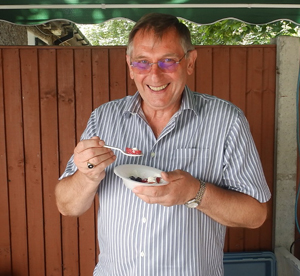 Another sold out event saw 130 guests, Masonic and non-Masonic, enjoy a fine choice of meats, fish and chicken, accompanied by various baked potatoes with a choice of fillings, salad and bread rolls. Diners lined up to be served the prepared feast by members of the committee, overseen by their wives and partners.

Ormskirk and Bootle Group Chairman Graham Chambers, a retired Boucher (butcher) and committee member, alongside Joe Williams and Roger Holt were the first to greet diners with a hearty welcome and a joke or two. Guests were also offered a complimentary drink with a choice of alcoholic or soft drink from the bar, which was manned by Tony Collier.

The main course was followed by a choice of apple pie and custard or fresh fruit and cream, cheese and biscuits, coffee or tea. The food had been prepared and cooked by Graham in the kitchen at the Masonic Hall, Litherland and was kindly overseen by Yates Catering, who currently provide the meals at the hall.

Chairman of the Friends of Tithebarn John Stallard opened proceedings with a welcome to all guests, which included Cheshire Area 1 Group Chairman Gary Usherwood and Southport Group Chairman Colin Jenkins. Also present was Assistant Provincial Grand Master Frank Umbers. John also announced that a raffle would be taking place plus an auction for some football memorabilia.

Tuning up in the background were the ‘Whisky Wooders’, who have been entertaining at the event for a number of years. All the band members hail from Burtonwood near Warrington, where residents are known as Wooders, hence the name of the band.

Dozens of raffle prizes, kindly donated by generous supporters of the event, were on offer and the big-hearted participants generously coughed up a total of over £600.

The auction, which was conducted by Joe Williams brought in another £640. John paid a special compliment to James Cochrane of Lodge of Harmony No 220 within the Garston Group, who had cajoled the management of both Liverpool and Everton Football Clubs to donate signed shirts, footballs and photographs. John also informed those present that a new minibus ambulance, which cost £45,000, was soon to be delivered to the care home and was paid for entirely by funds raised by ‘The Friends of Tithebarn’, from lodges in the catchment area and from fundraising events such as the ‘meat feast’. This brought about a thunderous round of applause.

There was a further presentation from Graham to John Stallard of a cheque for the magnificent amount of £1,750 from lodges within the Ormskirk and Bootle Group, which when added to donations direct from a number of other lodges, totalled £2,500. The money has already been earmarked for modifications and redecoration to the residents dining room.

Suitably fed, watered and divested of all but their taxi fare home, the guests settled down to enjoy the music, many taking to the improvised dance floor to burn off some calories. The end of a very memorable, enjoyable and financially successful afternoon for the Friends of Tithebarn and their satisfied guests. 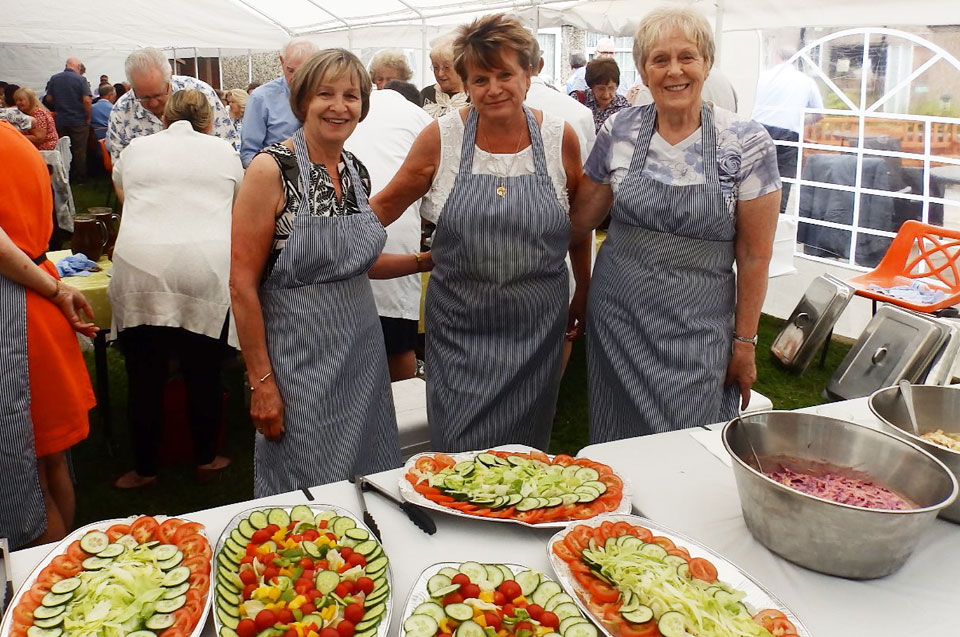 Article and photographs by Phil Marshall

Home
About Freemasonry
Our group
Group officers
Privacy and Accessibility